MOAA STORMS THE HILL FOR YOU

MOAA Council and Chapter Presidents from the 50 states and Puerto Rico, accompanied by members of the national Board of Directors and headquarters staff, plus members of MOAA's Active Duty, Guard, Reserve, spouse and auxiliary advisory committees swarmed Capitol Hill on April 13 to visit nearly all 535 representatives and senators in support of key legislative priorities. This year, the "Hill-stormers" met with their legislators to focus on:

Capping any future TRICARE fee increases at the COLA percentage

MOAA Hill-stormers received very positive feedback from most legislators, and we hope to see a considerable jump in the number of cosponsors for MOAA supported bills on these topics. Check your representatives' and senators' co-sponsorship status for the bills listed below:

H.R. 181, H.R. 1283 – Authorize Reserve retirement age credit for all active service since 9/11, and eliminate a glitch that denies full credit for active duty tours that span more than one fiscal year

You can enhance MOAA's Hill-storming results by entering your ZIP code in the applicable box for each bill to send your legislators a MOAA suggested message.

This luncheon has become one of the Virginia Council’s signature events. It is our opportunity to thank our Congressional leaders for what they have done for our military – active, guard and reserve – for our veterans, our retired military and families. No other council in MOAA does this and we have been doing this for 25 years! This luncheon is also an opportunity to express to our Congressmen our deep concerns about the need to keep our national defense strong and to protect the healthcare for the men and women who serve and sacrificed for their country.”

COL Kaiserman pointed out that the annual luncheon is a chance to focus the attention of Virginia’s 13-member congressional delegation on priority issues. He stressed that legislative objectives are not focused primarily on retirees or veterans, but support those serving of all ranks, and their families and survivors. VCOC’s top objective is to strengthen the military’s volunteer force. Specifically, they press to increase the size of ground forces, prevent the erosion of health benefits, and help widows and wounded.

Senator Jim Webb, our sponsor for the meeting room, addressed 135 Virginia chapter officers and surviving spouses of officers, as did Senator Mark Warner and nine of Virginia’s eleven Representatives.

COL Hostetler, U.S. Army Retired, introduced Congressman Scott, one of the nine House representatives to address the MOAA gathering. Mr. Scott, himself a former Army National Guard and Reserve soldier, promised to continue his support for our nation’s readiness and veterans’ issues. PACMOAA attendees thanked him and Congressman Forbes for their on-going support of our military who carry the heavy burden of our current overseas struggles and veterans, current and future, who must be supported by a grateful and dependent nation. It is hoped that a growing relationship with these House and Senate representatives can be developed by the Portsmouth Chapter.

An independent, nonprofit, politically nonpartisan organization, MOAA has approximately 370,000 members of the uniformed services - active duty, former and retired, National Guard and Reserve nationwide and about 49,000 Virginia members. The Virginia Council of Chapters (VCOC) is an affiliation of MOAA’s 18 Virginia chapters. The VCOC website, VirginiaMOAA.com, includes both national and state legislative sections. The Portsmouth Area Chapter meets monthly to share and learn of important local, state, and national issues, especially as they relate to Virginia’s active and Veteran military and their families. Any current or past military officers, active or Guard/Reserve is eligible and encouraged to join.

for Troops, Survivors and Retirees

MOAA Council and Chapter Presidents from the 50 states and Puerto Rico, accompanied by members of the national Board of Directors and headquarters staff, swarmed Capitol Hill on April 2 to visit representatives' and senators' offices on key MOAA legislative initiatives. This year, the "Hill-stormers" focused on three main issues, supporting efforts to:

Increase the 2009 military pay raise above the 3.4% proposed in the President's budget.

MOAA representatives carried a wealth of information supporting those goals, including two information brochures on why it's unfair to double or triple military retiree health care fees and illustrating the fixes needed to eliminate survivor benefits and concurrent receipt inequities.  MOAA Hill-stormers received very positive feedback from most legislators, and we've already seen a jump in the number of cosponsors for MOAA-supported bills on these topics. Check your representatives' and senators' co-sponsorship status for the bills listed below:

Bob Parker, Shirley Barker and Alice Taves represented PACMOAA at the 23rd Annual Congressional Appreciation Luncheon hosted by VCOC at the Russell Senate Caucus room in D.C. Approximately 100 people were in attendance at the luncheon. Each of the 13 Virginia congressional members was invited to dine with constituents and address the attendees.

Sen. Warner addressed the group, saying this would be his last chance to do so as he is retiring. Sen. Warner, like several of the congressional delegates in attendance, heaped much praise on MOAA, and VCOC in particular, for their outstanding Legislative efforts. He noted that the MOAA organization promotes pride in serving one's country and is a true advocate for those who serve.

The bottom-line object of the luncheon is to thank our VA delegation for all they have done for our veterans and active military over the past year and keep the delegates aware of our National Legislative Objectives:

3. Increase size of our ground forces.

5. Implement the recommendations of the Vets Disability Benefits Commission. 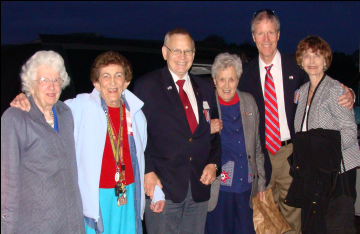 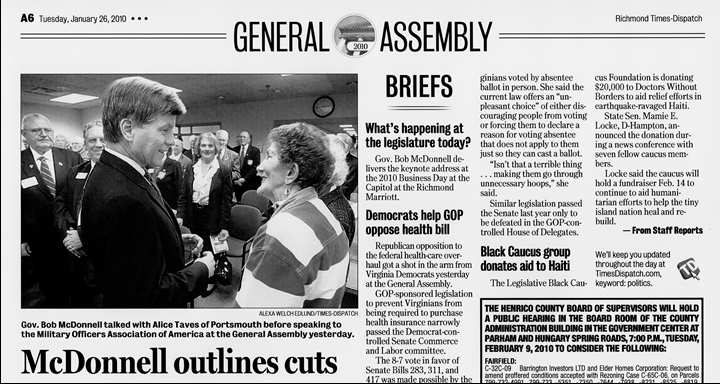